A downloadable game for Windows and macOS

== Both of our FREE content updates - SHUTDOWN and SHUT UP - are now live! ==

SHUT IN is a dark comedy/psychological horror adventure game which explores depression and isolation by trapping you inside your own house.

Your task is simple: Get out of bed, go outside, and get some Fresh Air. Think you can handle that?

Oh, but it might not be quite that simple. Your house isn't looking quite like it used to. You don't recognise any of these photos, everything's gotten dirty and disgusting, cracks seem to be opening up everywhere, and you're SURE everything didn't used to be so... constantly trying to kill you.

Maybe it's not worth it. Maybe go back to bed. Try again tomorrow.

If you do decide to keep going, you'll have to face strange puzzles, bizarre and uncomfortable obstacles, and a narrator who is unreliable at best, and downright insulting at worst. You'll have to get through your day under a constant barrage of judgment, sarcasm, and melancholy. If you can cope with that. Idiot.

SHUT IN is about tension and discomfort in a familiar environment. Your greatest tools are also your worst enemies. Common sense will keep you alive, but it might not get you very far. Curiosity can have great rewards, but will probably just get you killed.

But don't worry. When you (inevitably) die - because you fell down the stairs, were too stupid to operate an oven properly, got ripped apart by untold invisible horror, something like that - you can always just give up. Try again tomorrow. Or the next day. Or the next day.

Here's what people have been saying about the game:

“Tackles the subject of mental health in a really clever way... whilst striking the perfect balance with its dark comedy.”
9.2/10 – Full Sync

“With depth far beyond the initial on-the-surface horror story, this experience taps into the evocativeness of a mental health crisis.”
9/10 – Cubed3

“Exploring themes of mental illness has certainly been done in games before, but SHUT IN does it exceptionally well.”
4/5 – Adventure Gamers

-- For another game by Cael O'Sullivan & Hidden Track, check out How to Win: Season One - now available on Steam & Itch.io for absolutely free! --

In order to download this game you must purchase it at or above the minimum price of $4.99 USD. You will get access to the following files:

Great game, speaks to me as someone who’s dealt with their fair share of inner demons. Only complaint is that I am unable to get the item required for the good ending, which kinda sucks.

Wow, really love this game! The combination of the puzzles and the changing environment really interested me and I felt pretty immersed at times. I'm not really sure what I did at the ending, but I guess I just finished the game the way it should be. Once again, great job!

This will not run on mac

I have played only like ten minutes of this but holy shit do I feel personally attacked lmao.

Why on Earth would you make this in RPG Maker and not an engine better suited to this kind of game? It couldn't be that like me you are way, way, way too absurdly proficient with that specific game engine and nothing else?

Not doing exhaustive spoilers RN but at least one of the key features is revealed as an outright lie less than five minutes into the game. I will give this more time and feedback later because I'm very intrigued, but the last thing I wanted to say is that whenever I hear any of the default RTP sound effects it detracts rom the game's otherwise stellar job of establishing a certain mood. This is probably just a me thing though, as I have been hearing some of these sound effects for literally 20 years.

This game is great. It touches such difficult topics and has a unsettling art style and atmosphere. Worth every buck. Not convinced yet? Take a peek at the amazing work yourself:

I came from the Markiplier video "What were the bees for ?"

I watched Markiplier play this game, and it looks amazing! The art style is very cool, and I love the lighting! Definitely gonna be a source of inspiration if I ever make a horror game :D

this game is awesome i think its really cool how you can turn such a terrible (and for me relatable) time into such a fun game i also think Markiplier's video gives a great insight on this game on how the house is a metaphor for one's brain - one final side note as someone who has had extreme depression,  everyone's story is different there is no such thing as a solution to depression, you might have to leave your comfort zone maybe get some fresh air or maybe you really do just need a break, everyone has a different ending.

i dont think you looked into it enough, you only scratched the surface. that may be BECAUSE of your depression. but, for someone with a clear head, it shows you the voice in your head. the unneeded effort for small things. the constant desire to go off track, the laziness. the self-destructive thoughts. the game is much more than what it seems on the surface. however, everyone's experience is different. i really hope you make a smooth recovery and never have to suffer again, and can one day see this game for what it truly is. i hope one day you are truly happy for the rest of your life :)

This game was pretty good. I have to fully support a game this well polished.

This is part 1. I'm still trying to figure things out.

literally the game ever i'm so fascinated with it and i can't wait for 1.2. where do i report bugs though?

Really cool game! Got it in the bundle and it was interesting, I liked the humour and commentary.

Tried out your game...

Funny humor, good atmosphere, can be tense sometimes - a solid game. Lets get this out before AlphaBetaGamer and Manly get their hands on it ;)

Thanks so much! Glad you enjoyed it :)

Fun game, enjoyed, and I'll be making an LP on it - though I'm wanting to ask a few things in your Twitter DMs if you don't mind lending me your time. 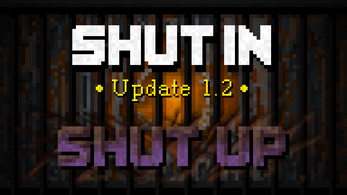